From the first African slaves brought to the shores of the American colonies in the 1600s through the present day, African Americans have had an active and intricate role in the history of labor in the Western Hemisphere and beyond. But, although they’ve filled a wide range of roles vital in building and sustaining the nation’s economy, African Americans have often found themselves with few economic and career resources of their own and, historically, have been restricted to lower-paying sectors of the economy. Moreover, despite improvements in workplace diversity, African Americans have faced a long history of workplace discrimination as employees and job-seekers—and they still continue to face obstacles today.

PeopleScout is committed to providing you with information to help guide you on your DE&I journey. Specifically, we aim to cover a wide range of DE&I topics, including issues regarding Black, Indigenous and people of color (BIPOC); the LGBTQ+ community; gender gaps; people with disabilities and more. In this article, we cover the history and experiences of African American workers and offer advice and recommendations for employers looking to build more inclusive workplaces.

In the 17th century, European colonists needed to meet the expanded labor needs of the rapidly growing North American colonies. Although they previously depended primarily on indentured servants from Europe, they now opted for a cheaper and more plentiful labor source: African slaves.

Historians estimate that up to 12 million African slaves made the middle passage during the trans-Atlantic slave trade. Following the Revolutionary War, the rural South’s demand for slave labor increased due to rising cotton production supplanting traditional cash crops, like tobacco and sugar. Eventually, the South’s demands for slave labor and growing calls in the North for its abolition led to decades of political and social tension.

Then, in 1861, the tensions between the North and the South erupted into the Civil War in America. And, on January 1, 1863, President Abraham Lincoln’s Emancipation Proclamation made it official that the enslaved “shall be then, thenceforward, and forever free”—a major blow to the Confederate states’ labor force. The Union’s victory in the Civil War granted freedom to 4 million African slaves, and in 1865, the 13th Amendment officially abolished slavery. However, significant obstacles to full enfranchisement laid ahead during the Reconstruction era.

After the end of slavery, Southern legislators passed a series of laws (also known as “Black codes”) intended to bar African Americans from skilled trades. While northern states outlawed similar practices, in the south, white craftsmen resisted accepting Black workers into trade work. Consequently, these restrictions on ex-slaves made them reliant on their former owners for work as landless sharecroppers.

Sharecroppers exchanged their labor for tools, seeds, fertilizer and access to land to harvest their crops. Although they now had more independence than they did during slavery, sharecroppers also had to pay substantial rent and interest, as well as turn over a large portion of the crop to their landlord.

Meanwhile, to escape the oppression of the sharecropping systems and Jim Crow laws of the south, many Black families migrated west and north in search of better-paying jobs in manufacturing and professional roles. Nevertheless, many Black migrants were excluded from professional trades and manufacturing jobs, and often confined to unskilled labor or domestic service.

A History of Progress: 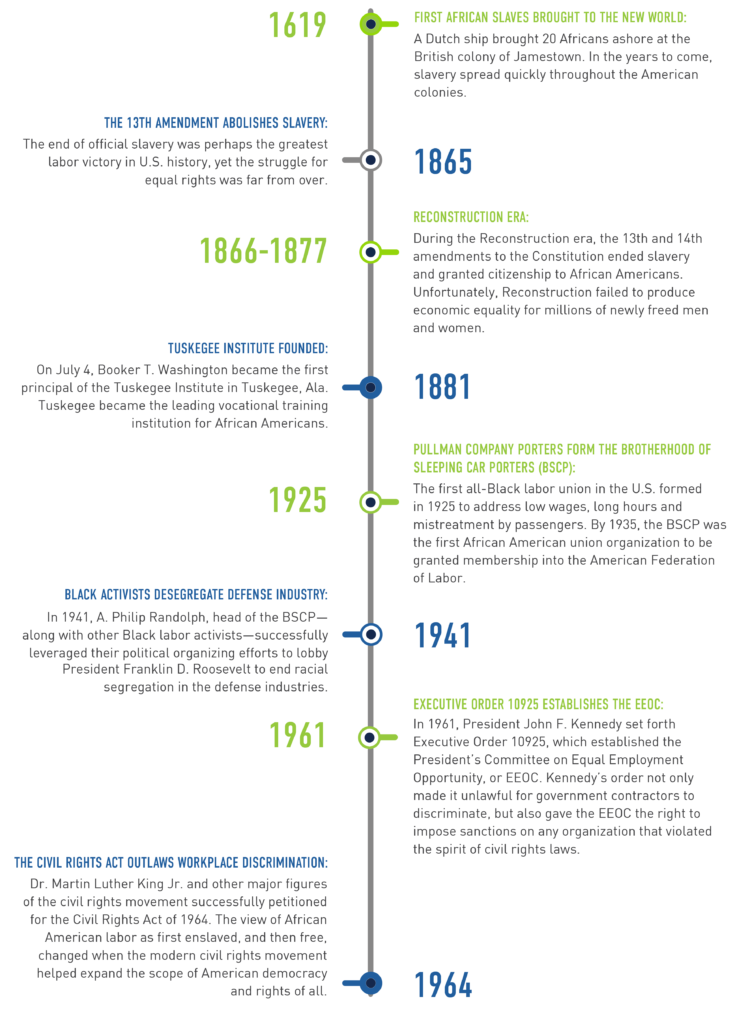 African Americans in the Modern Workforce

Even today, African Americans continue to face both explicit discrimination and more subtle forms of prejudice on the job. In fact, according to a survey conducted by Gallup, 72% of Black professionals have experienced racial discrimination in the workplace—a higher percentage than all other ethnic groups surveyed.

And, although companies claim that they want to overcome these explicit and implicit biases to hire and promote diverse candidates, they rarely do so in effective ways. So, in this section, we outline ways in which employers can better support and promote the inclusion of their African American employees.

Racial identity can be very personal, and the language employers use to refer to a person’s race is a reflection of that. For instance, “Black” and “African American” are not always interchangeable: African American is typically used to refer to descendants of Africans who were enslaved. Moreover, some individuals prefer the term Black because they don’t identify as African or because they view being Black as being about more than race; it may carry cultural meaning, as well. Moreover, some people identify as both Black and African American and use the terms interchangeably for themselves, depending on the situation. Whether someone prefers “African American” or “Black” is very much up to the person, so it’s always advisable to ask an individual which term they prefer.

Being African American in the workplace can be emotionally taxing. For example, research by the University of Virginia found that Black employees felt a strong sense of difference between themselves and their mostly white peers and, as a result, their ability to contribute was diminished. Obviously, this sense of isolation can take a toll. However, creating employee resource groups (ERGs) can help to build a more inclusive environment and address diversity and inclusion in a more holistic and community-based way.

Notably, the first employee resource groups were initially workplace affinity groups that were created in response to racial strife during the civil rights era. Joseph Wilson, the former CEO of Xerox, developed the concept following race riots in Rochester, N.Y., in 1964.

Today, ERGs can empower underrepresented groups by giving each group a voice to discuss issues with decision-makers and leadership. ERGs also support learning and development by offering formal and informal leadership opportunities and creating visibility for employees who are active. Likewise, the groups may also provide resources and guidance for leadership regarding diversity issues, community needs and policy.

Often, Black employees report feeling less supported, engaged and dedicated to their employers than their non-Black coworkers. And, while many employers create diversity and inclusion programs to help improve the day-to-day experience of employees, many of these initiatives often fall short. The problem? Many DE&I programs tend to focus on helping employees from marginalized and underrepresented groups fit into the status quo of company culture—and don’t take enough action to remove systemic barriers to equality within their organizations.

Instead, organizations can start by leveraging data from pulse surveys and other tools to assess whether employees feel included on their teams and are treated equitably within the organization at large. To collect diversity information on their workforce, employers should refer to EEO data collected for compliance obligations. Then, once the diversity data is collected, compare it to the data available on the labor market. Specifically, look for gaps in diversity and then draft a plan to hire and retain more members of underrepresented groups.

Support African American Employees in Being Themselves

Members of underrepresented groups often feel pressure to conform, thereby suppressing their personal values and feeling uncomfortable bringing their whole selves to work. Along the same lines, research by McGill University shows that individuals may feel pressure to create “facades of conformity” to fit in with the culture of their employer—which can lead to a particular struggle with feeling inauthentic at work.

More precisely, African American employees might straighten their hair or “fine tune” their résumés by deleting ethnic-sounding names or companies. They might also suppress emotions related to racism in the workplace and in the world at large. Below, we’ve outlined a few ways that leaders can encourage employees to bring their true selves to work:

Meanwhile, recruiters may also have their own set of unconscious biases, thereby damaging an organization’s efforts to source diverse candidates. For this reason, implementing technology into the recruitment process can help decrease the unconscious bias that may take place during recruiting.

For instance, if you find that there’s a large drop in minority candidates moving between the on-site interview and skills assessment, then unconscious bias training may be in order. In this situation, follow your data closely to make more informed decisions and continue making progress on your organization’s diversity, equity and inclusion goals. Likewise, build a team of recruiters who hail from a wide range of backgrounds and advertise open roles to a talent pool that is full of diverse candidates. Employers should also take a holistic approach by focusing on building an inclusive employer brand and recruitment process.

Notably, employers that are intentional about increasing African American diversity should look to Historically Black Colleges and Universities (HBCUs), which produce nearly 20% of all African American college graduates. Organizations can partner with these schools to find promising entry-level employees with not only the necessary skills and education, but also the drive to have an influence early in their career. Plus, with the rise and ease of virtual career fairs and other ways to engage job-seekers, it’s easier than ever to access these highly desirable candidates. HBCUs also provide their students with career guidance and support to prepare them for the workforce, which makes these institutions an ideal place to recruit early talent. And, with an emphasis on mentorships, internships and other ways to participate actively in the larger community, HBCUs prepare students for life outside of the classroom, while also offering a safe, nurturing and inspiring environment—a place to thrive.

Despite increasing corporate investment in DE&I efforts, African Americans continue to face major barriers to advancement in the workplace. And now, more than ever before, organizations should strive to benefit from the experiences, knowledge and skills of everyone—not just a few. Organizations that understand the reality and history of the African American experience will be better able to embrace and champion policies and programs that help to level the playing field. This will be hard but rewarding work that helps not only African Americans, but also the entire workforce and society at large.

Read additional articles in the Q1 2022 issue of PeopleScout NEXT that focus on Now: Building a Modern DE&I Program.

Key metrics for measuring the success of your diversity recruiting efforts