At PeopleScout, we’re committed to providing you with information to help guide you on your diversity, equity and inclusion (DE&I) journey. As such, we aim to cover a wide range of DE&I topics, including issues regarding Black, Indigenous and people of color (BIPOC); the LGBTQ+ community; gender gaps; people with disabilities; and more. In this article, we cover the history and importance of Asian American and Pacific Islander (AAPI) Heritage Month and offer advice and recommendations for employers looking to build more inclusive workplaces for AAPI workers.

AAPI Heritage Month is celebrated in May for two main reasons: The first is to commemorate the first known Japanese immigration to the U.S. on May 7, 1843. The second is to honor the completion of the transcontinental railroad on May 10, 1869—a construction that was largely aided by the labor of more than 20,000 Chinese workers.

Asian Americans and Pacific Islanders have had a lasting influence on the history of the U.S. and will no doubt be just as instrumental in its future accomplishments and successes. But, are these Americans receiving the recognition, respect and inclusion they deserve? In this article, we’ll provide an overview of which ethnic groups are included in AAPI, discuss barriers this group may face in the workforce, and share actionable steps that your organization can take to foster inclusivity among AAPI employees.

Who Are Asian Americans & Pacific Islanders?

According to the Asian Pacific Institute on Gender-Based Violence, AAPI can be defined as “all people of Asian, Asian American or Pacific Islander ancestry who trace their origins to the countries, states, jurisdictions and/or the diasporic communities of these geographic regions.”

Let’s break this down further, keeping in mind that personal identifications can be complex and often overlapping. First, not all Asian people identify as American. So, depending on one’s background and upbringing, consider this list of terms to help keep track of who might fall into the larger AAPI community:

Clearly, there is immense diversity among members of AAPI heritage, and their ancestry and origins vary across the U.S. Here are visuals of the top ancestry groups and top countries of birth of AAPI immigrants based on research from the New American Economy: 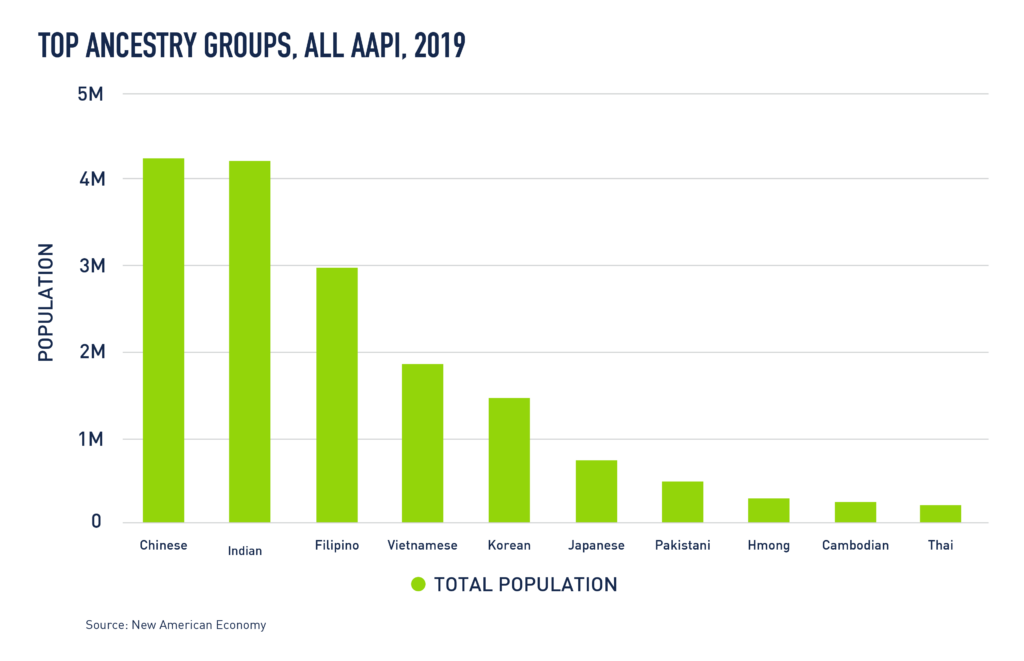 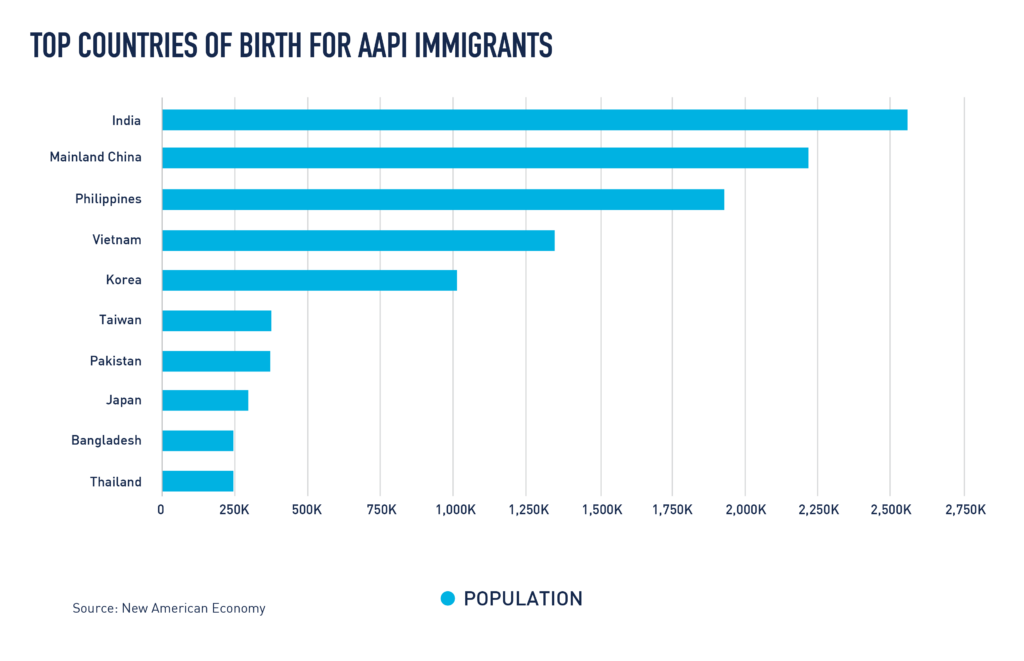 While the Asian American population is growing faster than any other group in the U.S., the same cannot be said for the rate at which this group is promoted into positions of leadership in organizations across the country: 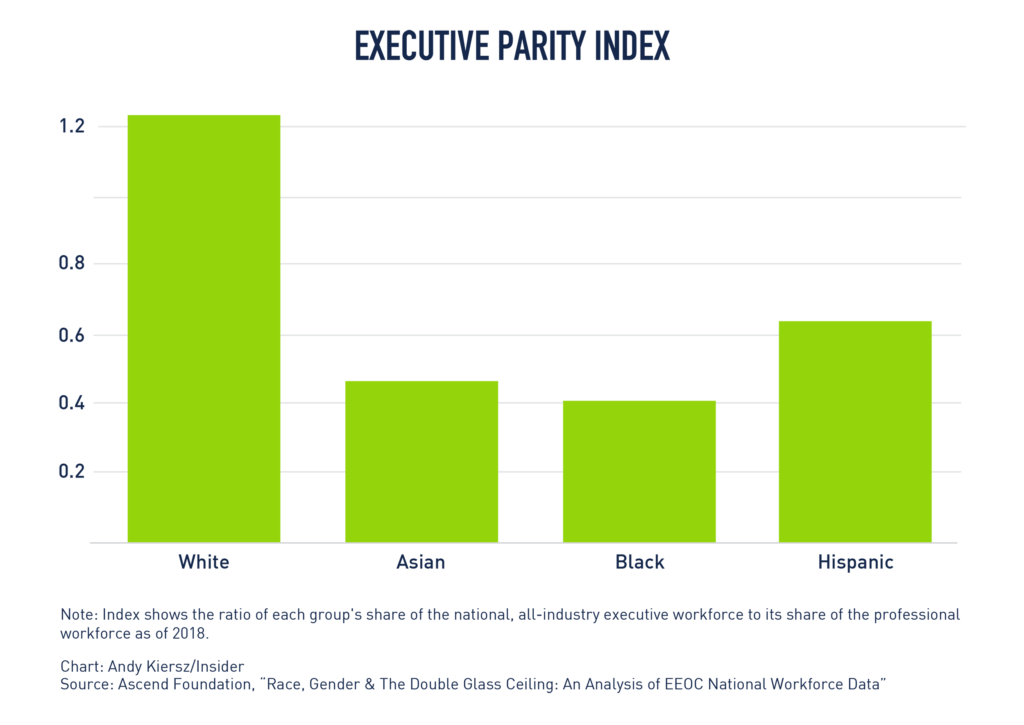 So, what’s the reason behind these massive gaps? In a nutshell: stereotypes.

AAPIs have often been mislabeled as the “model minority,” a term that stems from an article in The New York Times published in 1966 that praised Japanese Americans for overcoming prejudice, respecting authority, achieving academic excellence and “subordination of the individual to the group.” Additionally, according to CNBC, the model minority myth “also paints Asians as a monolith when, in fact, some 23 million Asian Americans trace their roots to more than 20 countries in East and Southeast Asia and the Indian subcontinent.”

Throughout the years, this description has come to stereotype all AAPI people as hardworking, smart, well-educated and faithful to their superiors. However, there are pitfalls to this idea; by placing Asian Americans on a pedestal for minority success in America, we’ve inadvertently made circumstances far worse for this community. For instance, by characterizing this group as having a higher level of “success” than the typical immigrant or other racial/ethnic group, it glosses over and seeks to erase the struggles, barriers, and various challenges and experiences that AAPIs face. Moreover, the same descriptors that have come to define “model minority” have also deemed this group unfit for leadership roles and promotions, due to a perceived lack of creativity, ambition and confidence—painting AAPIs as submissive and not “leadership material.”

What’s more, new research finds that Asian employees report feeling the least included of all demographic groups in the workplace, including Black and LGBTQ+ workers. As you can see in this research from Bain, only 25% to 30% of employees across all geographies, industries, and demographic groups said that they felt fully included at work, with only 16% of Asian men and 20% of Asian women feeling the same. 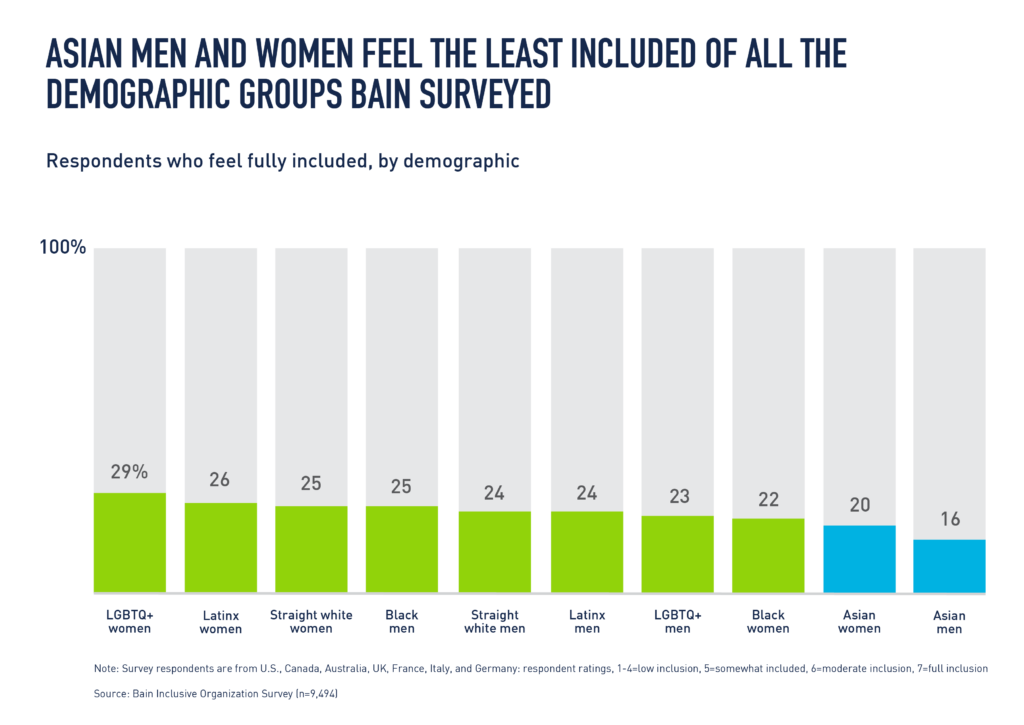 Because AAPIs have been characterized as the “model minority” for so long, non-AAPIs may not realize the extent of the barriers this group faces daily in the workforce. To address this, employers should spread awareness of the leadership gap that AAPI workers face and fold AAPI-related topics into organizational diversity and inclusion efforts. This can include bias training and learning programs to help make stakeholders and employees aware of the distinct obstacles facing AAPI workers.

Of course, the first step in building a diverse workforce is ensuring that your organization is inclusive of all types of people, including AAPIs. According to the EEOC, one of the most common barriers for AAPI employees and applicants is a lack of targeted recruitment. However, employers can combat this by establishing targeted recruitment plans that include goals and deadlines for attracting AAPI candidates, as well as by partnering with universities and organizations with a high percentage of AAPI students or professionals looking to advance in their careers. Organizations should also be sure to monitor and modify the plan as needed. Talent technologies like PeopleScout’s Affinix can help make this process simple with diversity dashboards that track progress toward specific goals.

For employers looking to diversify their leadership, developing a program that specifically invests in AAPI employees is a great way to start. Consider identifying top-performing individuals and providing them with opportunities to demonstrate their leadership abilities (such as more responsibility, a big project, presentation, etc.). Organizations can also provide these employees with mentors, as well as designated training paths to encourage promotion and growth.

Employee resource groups, or ERGs, are another great way to help employees within an organization build community and share a common cause—such as interests, backgrounds and identities. What’s more, an ERG focused around AAPIs can help these employees feel at home within an organization and can also serve as a community for non-AAPIs who want to learn more about the experiences of this diverse group. ERGs are also a great way to improve retention rates—because when employees truly feel included, they’re more likely to stay at an organization.

At PeopleScout and the broader TrueBlue organization, we’re proud to have the Asian Collective of Employees (ACE) ERG, a trustworthy forum where AAPIs and allies can share ideas, perspectives, and professional experiences to accelerate business and career growth, as well as increase cultural awareness.

With a rise in anti-Asian hate crimes following the COVID-19 pandemic, AAPIs were abruptly reminded that their sense of belonging in a predominately white society is often conditional. And, with the Stop AAPI Hate National Report finding that businesses are the primary site of discrimination (at 35%), organizations can have a powerful influence by addressing and acknowledging incidents, as well as offering open forums for discussion among employees. By amplifying AAPI voices and perspectives, AAPI employees will feel comfortable sharing their thoughts, feelings and experiences in a safe space, while also knowing that their employer cares. In addition, organizations can host speaker events featuring AAPI leaders and top performers within the company to highlight contributions and allow other AAPIs to see examples of success within the workplace.

AAPI month is a great opportunity for organizations to celebrate AAPI heritage and contributions, as well as show employees that their unique cultural differences are valued. Consider these ideas for celebrating AAPI Month within your organization:

DE&I as a Continuous Journey

As the U.S. continually becomes more diverse, so do organizations and the people in them. For organizations to stay competitive, DE&I is non-negotiable; a truly diverse company will include people from all backgrounds at all levels of the organization, including in leadership roles. And, when candidates and customers see that level of diversity, they’ll be more likely to invest their time and resources with those businesses.

However, diversity without inclusion does nothing for people or businesses. So, in order to retain your diverse employees, you’ll need to understand who they are, as well as celebrate their heritage and invest in their growth. It’s our responsibility as employers to identify groups that need amplification in the workforce—like AAPIs—and to foster long-term inclusion, representation and respect.

Read additional articles in the Q3 2022 issue of PeopleScout NEXT that focus on New: A Human-First Approach to Talent.

Is the Future of Contingent Labor Remote? The Remote Contract Employee Revolution

Is the Future of Contingent Labor Remote? The Remote Contract Employee Revolution

Boomerang Employees: How Looking Back Can Help Propel Your Organization Forward

Boomerang Employees: How Looking Back Can Help Propel Your Organization Forward

Expanding your talent pool to include former employees

Employee Engagement: Strategies for Reducing Turnover with an Engaged Workforce

Employee Engagement: Strategies for Reducing Turnover with an Engaged Workforce